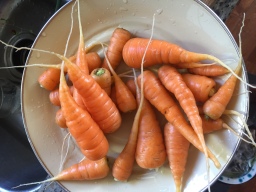 Oh summer, how you overwhelm my senses! From an abundance of sunshine on my skin, to the smell of ripening veggies on the vine, this summer has not disappointed. Nowhere is this more evident than in the small carrot and cucumber section of our raised beds. What these sections lack in space, they more than make up for in abundance. After running out of neighbors doorsteps to clandestinely leave cucumbers on, we realized we needed a real plan for preserving some of our sumptuous summer treats. Chris had a solution at the ready: pickling!  I love pickles, and the thought of creating our own pickles with ingredients gathered from our little front yard was just too tempting to resist. Now, about a week and half later I have sampled the goods and know for a fact that they are delicious (it was really 50:50 there, you never know).. so for anyone interested in making a little sour  treat, I present the easiest pickles! 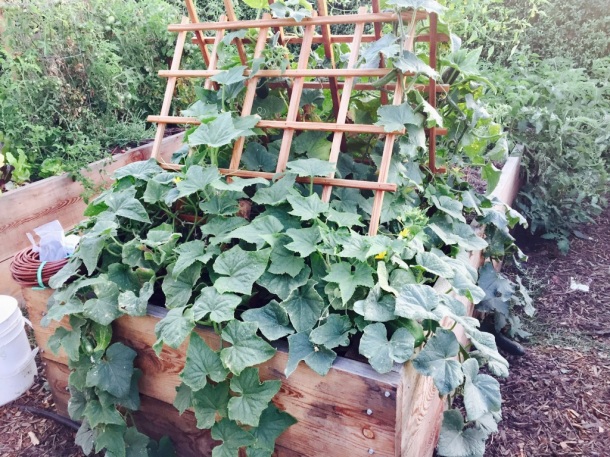 First, we washed a bunch of mason jars as well as all of our harvested veggies. As we washed away, Chris made a delicious brine of 1/2 vinegar 1/2 water and a small handful of salt (for an average sized pot). While boiling, we packed in as many veggies as we could, cutting slices of cucumbers, carrots and green beans, ensuring they fit within their glass enclosures. Next, after we allowed the brine to cool down, we poured the brine into the jars, covering their vegetative denizens. Of note: if you don’t have a funnel as we didn’t, we found our ceramic coffee filter did the job perfectly 🙂 Anyways, we then plopped them into the fridge and a couple days later, viola! Pickles! I am still absolutely amazed when we are able to make something around the house that I previously believed came from a store. Fresh ingredients, about 20 minutes of fun in the kitchen and countless gifts to coworkers and family and delicious sandwiches as a reward! Also, the flavors are totally up for your experimentation! Chris and I used a combination of the following in proportion to what just felt right (to be specific): jalapeños (also from the garden), bay leaves, mustard seeds, dill (also from the garden), coriander, pepper corn, thyme, oregano, chili peppers, and more 🙂 Happy pickling! 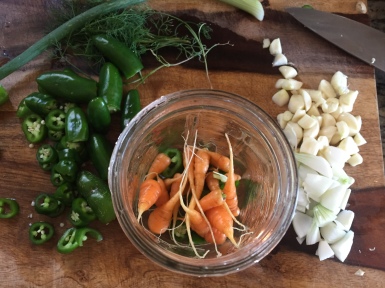 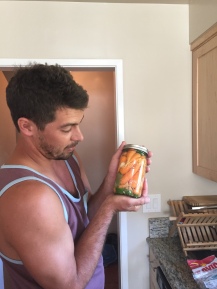 2 thoughts on “Sunshine in a jar!”