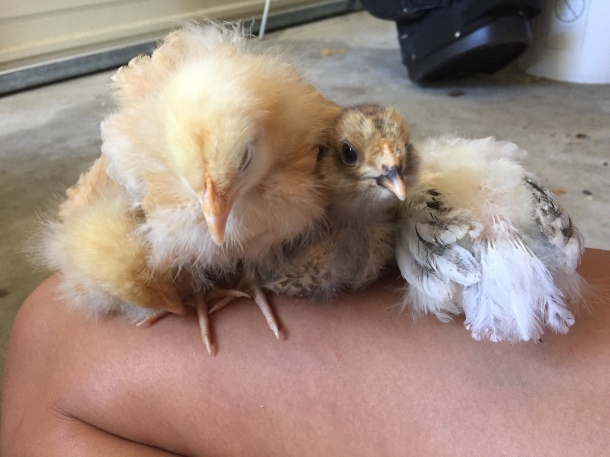 Our four little ladies: two Buff Orpingtons named Margarine and Mantequilla, a potential Americauna rooster named Polla, and a little cotton-ball Brahmah we like to call Chanclas (she has furry sandals).

I was living in Hawaii in a small, cinder block apartment when I first decided I had to have chickens. I am not really sure where the desire came from, especially while barely able to house a house-plant, not to mention a denizen of the outdoors.. but once I had the vision of a couple little chicks playing in my imaginary garden, I knew that someday I would need to make it happen. Almost five years later, Chris and I decided to finally take the plunge. Approximately 12 hours after we decided that there was no way we could possibly take on the added responsibility of a little flock this year, availing to revisit the topic next year, we found ourselves leaving our local feed store with a small cardboard box, alive with the cacophony of four peeping balls of fluff. Sometimes you just have to go for it?! I have had two books sitting on the shelf about how to raise chicks for years, yet when it actually came to selecting and planning for our new Dino relatives, we didn’t know the first thing. I had heard some vague rumors that chickens would attack slugs and snails with the veracity of a white shark on a elephant seal pup, so it was an easy sell to Chris who has been overwhelmed by the slimy fleet of garden lurkers, nibbling their way through our new sprouts! The other chicken “fact” I knew, was that chickens are pretty low maintenance and will give you delicious, fresh eggs in exchange for kitchen scraps- which sounded like a great deal to me! What I didn’t know when we brought these little living down pillows home, was how much I would enjoy being around them! As soon as we got the light up and going in their little tub to provide the necessary heat, I picked one up and it instantly fell asleep in my hands… swoon!

Not to say that it has been all sunshine and roses. Their poop smells atrocious (think rotten fish with a side of barnyard), they chirp and cluck at all hours of the day, and… then there is Polla.

This little chicken has some attitude and appears to be the top boss lady around these parts. We are slightly concerned that in fact Polla is really a poll-o, but the jury is still out, so for the time being, we love her just the same. Should he (ahem, she) turn out to be a lady hen, apparently she will produce eggs resplendent in ocean hued blue tones, so we will just have to wait and see! I have been slowly introducing our newest Roomates to our little yard, and have been so impressed by their lust for life and the outdoors. Each time we drop them off in a new part of the garden, their tentative curiosity takes over and they can’t help exploring by way of rubbing, rolling, eating and nestling into their surroundings. I can watch for hours as they test out which bugs taste best, how to take a proper dirt bath, and how to avoid re-capture efforts by their clumsy owner. All is all a wonderful addition to our home, and apparently we will have eggs by December! 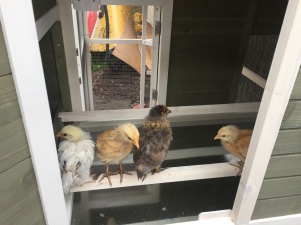