Its seems only fitting to begin this blogging adventure on the same week that I am starting my official gardening adventures at our little home in coastal California. Last Saturday, I made the fateful decision to order dirt. Not just dirt, A LOT of dirt. There are a couple things I learned through this process: a. dirt isn’t cheap b. dirt isn’t light c. you get a lot of funny looks from your neighbors when you dump 9 cubic yards of soil in the middle of the street, and d. the couple hour project I thought I was signing myself up for was not a couple hour project. A few beers, a lot of sweat and a couple 6 foot tall reinforcements lending a helping hand later, and after almost 8 hours, when the dust finally settled… quite literally I may add… we officially had three beautiful garden beds ready for planting! I should add that my hubby constructed some amazing garden beds out of “economy” grade, rough cut (read: the cheapest sustainably gathered wood we could find around town) redwood, so hopefully they last long enough that we won’t have to haul dirt again anytime soon! This idea was spawned a year ago when we moved into our little home and decided that one of our goals was to slow down and appreciate the little joys of nature that come with being in the garden and watching life grow around us. Our first order of business was to plant some fruit trees, a symbol of our new found permanence following years of living as veritable vagabonds. Our first year was a little busy with the two of starting new jobs and getting hitched, but now with our first official year in the house, we are planting our roots! After daydreaming about getting some good veggies in the ground, and in the meantime sneaking little plants wherever there was bare dirt, I am thrilled that we will be able to utilize our little space to produce some food! Our yard is tiny, but sunny and I am hopefully that we will be able to convert that sunshine and mother nature’s magic into something special and delicious! 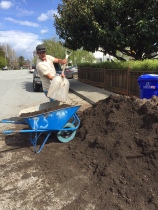